Wield or create weapons that can control reality.

The ability to wield or create weapons that can manipulate reality. Variation of Power Weaponry and Reality Object.

User can to create of wield any kind of weaponry that has power over reality, which grants the user of wide variety of reality based abilities such as changing existence, creating portals to other realities, rewriting the laws of physics, etc. This ability is not only specific to mystic weapons, but also technologically advanced weapons. The power of the weapons depends on what they were created for or what level of essokinetic ability they posses.

The Spear of Destiny (Arrowverse) can alter reality itself and allow the wielder to accomplish anything they desire by speaking a certain phrase in Aramaic from the book of Kalabos.

Krang (Batman/Teenage Mutant Ninja Turtles III) killed the Anti-Monitor and repurposed his corpse into an exo-suit, using the technology to create...

...the Crisis Tower, a device meant to merge the progenitor worlds of both the Ninja Turtles and Batman in order to reshape their multiverses into a new one controlled by Krang.

The Reality Gauntlet (Danny Phantom) uses the power of the Reality Gems to alter the very fabric of reality itself. 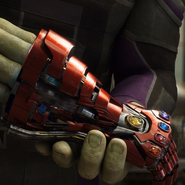 The Iron Gauntlet (Marvel Cinematic Universe), created by Tony Stark to house the Infinity Gems/Stones and alter reality much like the actual Infinity Gauntlet.

Ultron-Sigma (Marvel vs. Capcom: Infinite) possesses both the Space and Reality Infinity Gems/Stones, allowing him to warp reality to his desires.

The Infinity Sword (The Super Hero Squad Show)
Add a photo to this gallery
Retrieved from "https://powerlisting.fandom.com/wiki/Reality_Weaponry?oldid=1386112"
Community content is available under CC-BY-SA unless otherwise noted.