As his first act as God, Spawn (Image Comics) closed off the realms of Heaven and Hell from interacting with Earth.

The ability to close off a realm/reality and prevent them from interfering with another. Opposite to Realm Connection.

The user can close off a realm/reality and prevent them from interfering with another world or preventing other realities interfere with it.

Buffy Summers (Buffy the Vampire Slayer) destroys the Seed of Wonder, bringing about the end of magic and closing Earth off from all other dimensions.

Zobek/Death (Castlevania: Lords of Shadow) cast a spell that sealed the Earth off from the Heavens, preventing the dead from moving on. 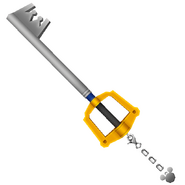 The Keyblade (Kingdom Hearts) can seal the Keyholes of the different worlds, closing them off from each other.

After expelling every angel, Metatron (Supernatural) sealed Heaven so that no-one, including deceased human souls, can re-enter.

Maxwell (Tales of Xillia) created a schism that closed the worlds of Elympios and Rieze Maxia off from one another.

Hekapoo (Star vs. the Forces of Evil) was created by Glossaryck to give beings the means to travel between the dimensions of the multiverse. Without her, all dimensions would be "infinitely separated, infinitely unaware of each other".
Add a photo to this gallery
Retrieved from "https://powerlisting.fandom.com/wiki/Realm_Closure?oldid=1202555"
Community content is available under CC-BY-SA unless otherwise noted.