The Eye of God (El-Hazard) can create connections to any dimension, universe or reality whenever its activated.

"Space. Literally it means 'nothing' - a vacuum between stars and planets. But by the same token, it means everything. It's what connects all our worlds."
― Captain Janeway (Star Trek Voyager)

The power to connect different dimensions, universes or realities together. Opposite to Realm Closure. Technique of Absolute Access.

User can connect any realm/reality to another, either temporarily or permanently. Connected realities can lead to exchanges of objects, forces and even people.

Sora (Kingdom Hearts) preparing to use his Keyblade to open a Gate to connect the worlds.

A big Void Rift near Icathia City (League of Legends). Void Rifts are portals where the Void can enter Runeterra. 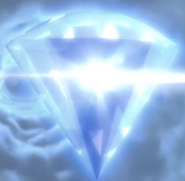 The realm of Andros (Winx Club) is the realm of oceans and is thusly connected to all the oceans of other realms within the Magic Dimension.
Add a photo to this gallery
Retrieved from "https://powerlisting.fandom.com/wiki/Realm_Connection?oldid=1395679"
Community content is available under CC-BY-SA unless otherwise noted.