Kirito (Sword Art Online) activating "Battle Healing" mode, which constantly regenerates his health as long as he remains in a certain stance.

Go into a recovery mode.

The ability to go into a mode made for recovering. Variation of Mode Switching.

The user can go into a mode that is made for recovery, healing from the wounds and injuries they may receive anywhere, refill their energy if it is low, and cure themselves of diseases. They can also get back up from being knocked down quicker. Most of the time, however, this power leaves the user vulnerable.

Using Concentration, Samus Aran (Metroid: Other M) recovers one Energy Tank and her supply of missiles. 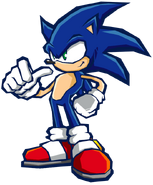 Sonic and other fighters (Sonic Battle) could use this ability via the "Heal Skill"
Add a photo to this gallery
Retrieved from "https://powerlisting.fandom.com/wiki/Recovery_Mode?oldid=1403469"
Community content is available under CC-BY-SA unless otherwise noted.