Use the traits of redcaps.

"Beware the wicked Redcap, he'd love to see you dead - he'll take all of your blood and wear it on his head."
― Traditional rhyme warning of the Redcap.

The power to use the abilities of redcaps. Variation of Goblin Physiology.

User with this ability either is or can transform into a redcap, a malevolent, murderous goblin found in Border folklore. They are depicted as "a short, thickset old man with long prominent teeth, skinny fingers armed with talons like eagles, large eyes of a fiery red color, grisly hair streaming down his shoulders, iron boots, a pikestaff in his left hand, and a red cap on his head". When travelers take refuge in his lair, he flings huge stones at them; and if he kills them, he soaks his cap in their blood, giving it a crimson hue. He is unaffected by human strength, but can be driven away by words of Scripture or by the brandishing of a crucifix, which cause him to utter a dismal yell and vanish in flames, leaving behind a large tooth. While traditionally male, more modern version include redcaps of both genders.

Redcaps inhabit ruined castles, especially those that were the scenes of tyranny or wicked deeds, and soak their caps in the blood of his victims 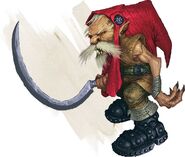 Redcap (Pathfinder)
Add a photo to this gallery
Retrieved from "https://powerlisting.fandom.com/wiki/Redcap_Physiology?oldid=1315916"
Community content is available under CC-BY-SA unless otherwise noted.