Gagamaru Chougasaki (Medaka Box) can shrug off any damage, at the expense of someone else.

Transfer alterations to others.

The ability to be immune to alterations by transferring them to others. Sub-power of Causality Manipulation.

User can push alterations affecting them onto others, either before (immutability) or after it happens (restoration). It notably applies to any ill effect: physical, mental, emotional, spiritual, magical, power-induced, etc.

This works both as perfect defense and perfect retaliation, as the user can both shrug any damages and send them back on the target of his/her choice (living things or inanimate objects).

This reflection can also be used as a mean of direct offense, by causing oneself damages that will be preemptively transferred to others like a living voodoo doll (before causing the user any actual harm).

Advanced users can transfer a single effect to several targets, stack up damages for more powerful counters, and extend the concept of "ill effect" to negative situations not directly affecting his body or mind (like restrain/imprisonment). 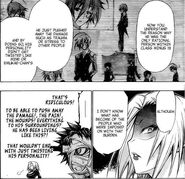 Funny Valentine (JJBA Part VII: SBR) displaying D4C: Love Train as it parts the ocean, redirecting the misfortune of the ocean being in his path.
Add a photo to this gallery
Retrieved from "https://powerlisting.fandom.com/wiki/Reflective_Immutability?oldid=1324254"
Community content is available under CC-BY-SA unless otherwise noted.