Utsuro (Gintama) granting Oboro limited regenerative powers via his immortal blood, though in the long terms the blood is actually causing the mortal body to corrode, while prolonging his suffering by preventing him from dying.

The power to grant others the power of regeneration. Sub-power of Regeneration Manipulation. Variation of Power Bestowal. Opposite to Healing Erasure.

User can grant other beings regeneration.

…enough to turn Angel from a vampire to a living human… 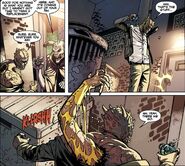 …and allow Kurth to regenerate his severed third arm.

The Hōgyoku (Bleach) granted Sōsuke Aizen a protective regeneration when he embedded it into his chest. 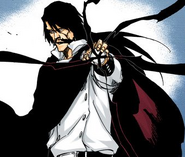 Yhwach (Bleach) granted his Sternritter various powers via his blood, some of which can have regenerative side-effects, such as Mask De Masculine, Gremmy Thoumeaux and Giselle Gewelle.

Nemu Kurotsuchi (Bleach) has a gland in her body that forces rapid cell regeneration at such a rate that if consumed, without the fail-safe implant, will cause the consumer to experience uncontrollable regeneration until the body self-destructs.

The Gekisen (Buso Renkin) grants its wielder, Genji Ikusabe, regeneration powers so long as he is holding onto it.

...affecting the Joker so much when he fell in it that he was able to regenerate his face after it was cut off, and instantly heal from a lethal gunshot.

Wood Golems (Disagaea) can bestow their regeneration abilities to others via Magichange.

Regenerator G1 (Godzilla) bestows Godzilla's regeneration upon any being that shares his cells.

After being shot, Noah Bennet (Heroes) is transfused with his daughter Claire's healing-enriched blood…

…regenerating his wounds and bringing him back from the dead.

Valerie's (Highschool DxD) Sephiroth Graal can use its power over life to give regeneration powers to others.

The Connors Formula (Marvel Comics) was created to allow others to regenerate lost limbs, though it had unexpected side effects.

…from cultivating cells out of Hashirama's artificial body.

Yume Hasegawa (Pupa) fed her brother Utsutsu some of her flesh to transform him into a Pupa monster just like her, as Pupa monsters have accelerated regenerative powers. 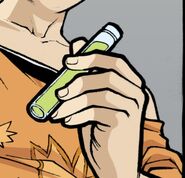 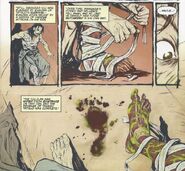 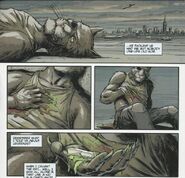 …and saving Old Hob's life when he was fatally shot by Baxter Stockman.

Jessica Hamby (True Blood) allows her husband Hoyt to drink her vampire blood to heal.
Add a photo to this gallery
Retrieved from "https://powerlisting.fandom.com/wiki/Regeneration_Bestowal?oldid=1332291"
Community content is available under CC-BY-SA unless otherwise noted.