James ”Logan” Howlett/Wolverine (Marvel Comics) is one of the most well known users of this power.

Possess increased damage resistance as a result of accelerated healing.

"I always did like that about you, Logan...You never were afraid to take a Beating."
― Silas Burr/Cyber (Marvel Comics)

The power to possess increased durability as a result of accelerated healing. Combination of Regenerative Healing Factor and Enhanced Durability.

User possesses enhanced resistance to physical damage as a result of an accelerated healing factor.

Aoba Takatsu's subordinates (Code: Breaker) possess the ability Cell Stimulation, which causes their cells to grow and regenerate whenever they are attacked, gaining in size and power as long as not all of their cells are destroyed at once.

Kisame Hoshigaki (Naruto) absorbing chakra from his blade, Samehada, to regenerate both damaged tissues and stamina, gaining an upper hand in extended battles.

Marco (One Piece) possesses tremendous durability due to his Blue Flames of Resurrection keep regenerating damage.

James ”Logan” Howlett/Wolverine (Marvel Comics) throwing himself off a Helicarrier...

...and taking a hailstorm of bullets. 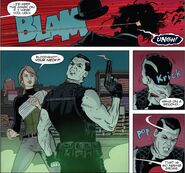 Freddy Krueger (A Nightmare on Elm Street)
Add a photo to this gallery
Retrieved from "https://powerlisting.fandom.com/wiki/Regenerative_Durability?oldid=1595389"
Community content is available under CC-BY-SA unless otherwise noted.