"I created a clone of myself and was able to escape. Much like the Great Sage Equal of Heaven, that explains why I'm standing here before you."
― Alucard (Rosario+Vampire)

The power to regenerate body parts into full bodies. Combination of Regenerative Healing Factor and Replication. Not to be confused with Replication Regeneration.

Users possess extreme regeneration, allowing them to not only recover from any wound almost instantly but even regenerate separated body parts into full bodies, each as powerful as the original. This tremendous life-force is usually associated with some kind of biological immortality, all bodies being connected together in a unique hive mind. 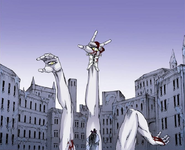 Pernida Parkngjas (Bleach) growing additional copies of itself out of severed fingers.

Hedrox the Infinite (BloodRayne) demonstrates the reason for his name.

Aoba Takatsu's subordinates (Code:Breaker) possess the ability Cell Stimulation, which causes their cells to grow and regenerate whenever they are attacked, even creating clones when severed.

Infinite Zamasu's (Dragon Ball Super manga) regeneration is so powerful that he was able to survive being blasted to pieces and had pieces regenerate to form clones of Fused Zamasu.

Whenever a Fu-Lum (Dragon Ball Evolution) has a body part severed or gets cut in half, two Fu-Lum grow in its place.

Utsuro (Gintama) regenerated an entire body from his severed right arm alone, leaving his former body as a decoy clone to distract Umibozu; doing so, however, greatly drained him of his Altana, which can only be recovered if on Earth.

Shin Godzilla's (Godzilla) regeneration is so powerful that pieces of flesh blown off of his body can grow into new Shin Godzillas.

Whenever one of the Pod Lumpys (Happy Tree Friends) has a body part severed or gets cut in half, two Pod Lumpys grow in its place.

Alucard (Rosario + Vampire) regenerating part of himself into a clone of his human form, allowing him to remain active despite his main body being sealed. 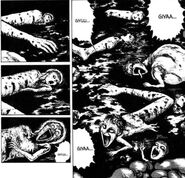 Tomie Kawakami's (Tomie) regeneration is so powerful that severed parts of her body eventually grow into clones of her.

Elg (Toriko) regenerated each shard into a full body after being shattered into a thousand pieces by Buranchi's lightning sword technique.
Add a photo to this gallery
Retrieved from "https://powerlisting.fandom.com/wiki/Regenerative_Replication?oldid=1414971"
Community content is available under CC-BY-SA unless otherwise noted.