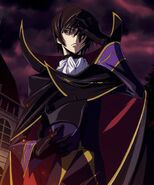 Kakashi Hatake (Naruto) must keep his Sharingan covered or it would drain his energy reserves.

Bartholomew Kuma (One Piece) had to wear gloves to keep his Paw-Paw Fruit/Nikyu Nikyu no Mi powers in check.

Bui's (Yu Yu Hakusho) Demon Energy is so great, he cannot control it on his own, so he wears a special type of armor in order to keep his powers contained.
Add a photo to this gallery

Blight (Batman Beyond) wears specialized synthetic skin to keep his radiation in check, however the more angry he gets the skin melts off showing his true appearance.

Raven (Teen Titans) must meditate daily to keep her emotions and powers in check.

Alex Summers/Havok (Marvel Comics) needs to wear a special suit to keep his powers in check to avoid accidentally hurting someone.

Jamie Madrox/Multiple Man (Marvel Comics) requires a special suit to keep himself from multiplying from impacts.

Ann Marie LeBeau/Rogue (Marvel Comics) needs to keep her skin covered to keep her powers from harming others.

Regal Bryant (Tales of Symphonia) constantly wears handcuffs to limit himself.
Add a photo to this gallery
Retrieved from "https://powerlisting.fandom.com/wiki/Regulation?oldid=1721030"
Community content is available under CC-BY-SA unless otherwise noted.