Raven (Teen Titans) must meditate daily to keep her emotions and powers in check.

Alex Summers/Havok (Marvel Comics) needs to wear a special suit to keep his powers in check to avoid accidentally hurting someone. 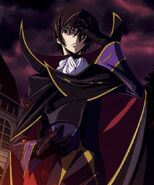 Regal Bryant (Tales of Symphonia) constantly wears handcuffs to limit himself.
Add a photo to this gallery
Retrieved from "https://powerlisting.fandom.com/wiki/Regulation?oldid=1514338"
Community content is available under CC-BY-SA unless otherwise noted.