Apocalypse (Marvel Comics) possessed and used this ability to survive many times.

Be reborn after death into another form.

"I suspect that we will continue to die and be reborn until we finally get our life right. I do not know what we have to do to bring that about, though. And therein lies the frustration."
― The Nameless One (Planescape: Torment)

The power to pass one's spirit/soul into another body after death. Not to be confused with Resurrection as the user possesses a new body.

The user is capable of surviving and escaping death by being reborn in the body of another or possess a body that was just born.

If they reincarnate by possessing another body they gain the physical capabilities of the host, but also the drawbacks and potentially the social connections as well.

If they reincarnate by being reborn in new body, their original powers may be radically changed in strength or they may end up with new powers.

Korra (Avatar: The Legend of Korra) is one of the many reincarnations of the Avatar, with her previous incarnation being Aang.

Lloyd Garmadon (Lego Ninjago: Masters of Spinjitzu), the reincarnation of First Spinjitzu Master.
Add a photo to this gallery

Rose Tattoo (Image Comics) being the spirit of murder, she can never die. Whenever she does the spirit will pass onto a new host for her to inhabit.

...while the Turtles are the reincarnations of Hamato Yoshi's four sons.
Add a photo to this gallery

The Eternal Champion (Moorcock Multiverse) is endlessly reincarnated throughout the multiverse in different identities, doomed to eternal battle.

Elric of Melniboné is but one of the many incarnations of the constantly reincarnated Eternal Champion.

Ingrid and Freya Beauchamp (Witches of East End) are reborn multiple times throughout the centuries.
Add a photo to this gallery

The Master (Doctor Who) passing from one incarnation to another after a fatal injury.

Sister Nicci (Legend of the Seeker) gets Reincarnated into a new body with the aid of the Sisters of the Dark.

Eve (Xena: Warrior Princess) is the reincarnation of Callisto.
Add a photo to this gallery

Two years after becoming a God Hand, Griffith (Berserk) was reincarnated on earth, with the full power of his God Hand form of Femto at his beck and call.

Eriol Hiiragizawa (Cardcaptor Sakura) is the reincarnation of Clow Reed.

Piccolo Jr. (Dragon Ball) is the reincarnation of King Piccolo.

Due to having permanently assimilated the Grand Supreme Kai, Majin Buu (Dragon Ball series) has essentially become his reincarnation after expelling all his inner evil.

...and is reincarnated onto him.

Yuca (Immortal Rain) is the Spirit of Methuselah, and has constantly been reincarnating since the beginning of human history.

Kagome Higurashi (Inuyasha) alongside her past life, the priestess Kikyo.

After their deaths, Asura's and Indra's Chakra (Naruto) have been reincarnated to vessel's worthy of their chakra, their current vessels are Naruto Uzumaki/Asura and Sasuke Uchiha/Indra.

Orochimaru (Naruto) using his "Living Corpse Reincarnation" to reincarnate himself into a new body, thus erasing any permanent damage and aging.

Mavis and Zeref (Fairy Tail) meeting once again after being reincarnated as Arius and Mio.

Elizabeth Liones (Nanatsu no Taizai) is the 107th reincarnation of a goddess cursed with a perpetual reincarnation.

After the Noah were killed by the betrayal of the Nea D.Campbell except the Earl and Road, Noah Clan (D.Gray-man) every member were reincarnated by each generation awakening their Noah Genes over again except for Skinn Bolic.

Vandalieu (The Death Mage Who Doesn't Want a Fourth Time) is a reincarnated individual and can use Death-attribute magic to perform pseudo-reincarnation on others.
Add a photo to this gallery

Soma Cruz (Castlevania) is the reincarnation of Dracula. 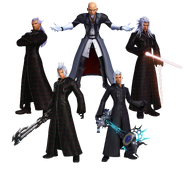 Althena (Lunar) has reincarnated as a human more than once...

...Luna Noa being one of them.

In its death throes, the Metroid Prime (Metroid) steals Samus Aran's Phazon Suit and a sample of her DNA...

...and uses the two to reincarnate as Dark Samus. 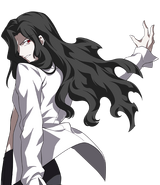 Hieda no Akyu (Touhou Project) Memory of Gensokyo, The Ninth Savant, is the current "Child of Miare", who is born in the Hieda family once in every few hundred years with the ability to "not forget anything she sees" and record Gensokyo's history.
Add a photo to this gallery

Ozpin V6 Intro (RWBY).png
Professor Ozpin (RWBY) was given the ability to reincarnate after death by merging his soul and Aura with another like-minded person...

...his first incarnation being the warrior Ozma...
Oscar Pine V5 Intro (RWBY).png
...and his latest being Oscar Pine.
Add a photo to this gallery

Start a Discussion Discussions about Reincarnation