Be all-powerful in a stable existence.

"Your reality's regulator has been pulled from it's purpose and put to another use,"
"Yet still it seeks coordination with it's counterparts,"
"The confusing signals it sends are disrupting the entire framework,"
"The danger of kingdom-wide shutdown is great."
"There is no way for you to personally remedy the situation?"
"I have tried and failed to gain control."
"But i thought you omnipotent! Infallible!"
"I am, within a well-functioning system....which this no longer is."
― The Above All Others and The Living Tribunal (Marvel Comics)

The power to be all-powerful in a stable system. Variation of Conditional Power. Expression of Nigh-Omnipotence.

The user is all-powerful in a stable existence or some other condition. Users are supreme beings and have absolute, unquestionable reign over everything and exist as the most powerful being in all existence as the One God.

However, their supremacy is contingent on certain conditions. This dependency can range from cosmic objects made to keep the balance of creation and support the user's omnipotence and supremacy, cosmic beings whose very existence keeps the supreme being in power, or the condition of all of creation itself could be what the user depends on to be in total control.

Users may be responsible for the balance of existence, as if it ever were to be disrupted, they would be especially vulnerable, depending on how severe the damage is.

Status quo wise, other examples can also include if it relies on chaos, or in other terms if chaos and order remain under balance, as opposed to just order.

Reliant and True Omnipotence operate similarly. In contrast, the latter is not bound by any condition for its power to function, making it truly without any weakness, and will not stop working regardless of circumstances.

The One Above All explaining the nature of it's power 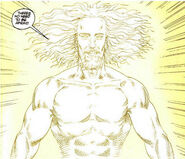 God (Preacher) is the sole creator of the cosmos and is completely almighty, invulnerable and all-knowing, except when he's not sitting on his throne.

While in control of The Throne, Hadou Gods (Shinza Bansho) become The One True God whose craving and desires is the absolute law throughout creation. However if another's law reaches a level of Taikyoku of greater strength/value, then they will be able to usurp the throne.
Português do Brasil
Community content is available under CC-BY-SA unless otherwise noted.
Advertisement