Amon (Starcraft) was able to to possess the Protoss via the Khala while he was in the Void.

Ability to possess another being from a distance. Sub-power of Meta-Possession. Variation of Possession.

User can host themselves into another body without the need for actual entry within their being with contact nor distance being an issue. They can remain in control of themselves be they spirit or flesh. User may be able to control multiple hosts at once while retaining control over their core body.

Xi'an Coy Manh/Karma's (Marvel Comics) psionic ability allows her to possess and take over the mind and body of another even from distance.

Mukuro Rokudo (Reborn!) can utilize his dying will flame to possess the bodies of others from long range. 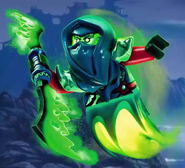 Bansha (Lego Ninjago: Masters of Spinjitsu) is a banshee like poltergeist who can overshadow people even from a great ways away.

Vlad Masters (Danny Phantom) used his duplicating power to posses more than one people.
Add a photo to this gallery
Retrieved from "https://powerlisting.fandom.com/wiki/Remote_Possession?oldid=1603977"
Community content is available under CC-BY-SA unless otherwise noted.