The power to push objects. Sub-power of Attraction & Repulsion. Opposite to Attraction.

The user can use various means (mental strength, magnetic force, etc.) to push objects away. 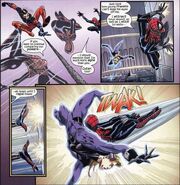 Bartholomew Kuma's (One Piece) Pad Cannon repels the air around him, sending a devastating shockwave toward his opponent at the speed of light and continues into the distance…

Anakin Skywalker/Darth Vader and Obi-Wan Kenobi (Star Wars) using Force Push on one another.
Add a photo to this gallery
Retrieved from "https://powerlisting.fandom.com/wiki/Repulsion?oldid=1578369"
Community content is available under CC-BY-SA unless otherwise noted.