Castiel (Supernatural) was killed by Lucifer but is then instantly resurrected by God.

Bring the dead back to life.

"Take it from someone who was beaten to death with a crowbar...Some crimes require a permanent solution."
― Jason Todd/Red Hood to Bruce Wayne/Batman (DC Comics)

The power to bring the deceased back to life. Not to be confused with Reanimation, which brings back the dead and controls them against their will.

The user can bring oneself and others back to life.

While he was an Avatar of the Phoenix Force, Cyclops (Marvel Comics) resurrected Jean Grey on the Blue Side of the Moon from dust.

The powers of the three Oni Masks (Lego Ninjago: Masters of Spinjitzu) can resurrect Lord Garmadon once all three are united together.

After his death and rebirth, Josh Foley/Elixir (Marvel Comics) can bring people back from the dead to the point that Josh was able to affect 16 million deceased mutants on Genosha at once.

HIM (The Powerpuff Girls) used his powers to bring the Rowdyruff Boys back from the dead.
Add a photo to this gallery

Shenlong (Dragon Ball) has the ability to resurrect anyone, with certain restrictions depending on which Shenlong cast the wish. This ability, unfortunately, has been repeatedly abused by the Z Fighters, resulting in dire consequences.

Zeref Dragneel (Fairy Tail) has done immense magic research on life and death, thus he succeeded in resurrecting his dead brother Natsu as a demon.

Valerie (Highschool DxD) can use Sephiroth Graal to resurrect the dead, being once forced by her brother Marius to revive the Evil Dragons.

The Meido Stone (InuYasha) resurrects Rin by pulling her soul out of Hell.

Sesshōmaru's Tenseiga (InuYasha) allows him to see the pallbearers of the afterlife and slay them, reviving the recently deceased and healing their wounds.

Nagato (Naruto) use the Outer Path: Samsara of Heavenly Life Technique/Gedo Art of Rinne Rebirth to, in exchange for his own life, infuse new life into the bodies of those who have died…

…which return to their respective bodies.

Brook's (One Piece) Revive-Revive Fruit/Yomi Yomi no Mi Devil Fruit powers resurrected himself once.
Add a photo to this gallery

...and Buffy Summers is resurrected.

Kierkan (Charmed) possesses the ability to bring the dead back to life.

Misty Day (Coven) has the power of Resurgence also known as Resurrection Considered more powerful than any of the seven wonders. It's a power that is inaccessible even to some Supremes.

Davina (The Originals) resurrected Kol by combining Kol's ashes with Klaus and Elijah's blood and channeling a Nexus Vorti.

King Nikolaus (Witches of East End) used this powers without having to suffer the consequences.

Jorge (Los Protegidos) can revive the dead by touching them.

When Curtis (Misfits) touches someone who is dead...

...they'll be resurrected back from the dead...

...but the side-effect is that anyone who is resurrected will developed a craving for human-flesh, as well for animals, turning them into zombies, as shown Shannon eating Seth's pet iguana to restrain her hunger...

...which has the same side-effect for animals who are resurrected back from the dead, as shown a cat named Mr.Miggles eating part of Maggie's face, his owner.

The Mark of Cain (Supernatural) is capable of resurrecting the bearer should they die, but will transform their soul into a Demon in the process.
Add a photo to this gallery

After being slain in battle during Calamity Ganon's attack, Link (The Legend of Zelda: Breath of the Wild) was revitalized over the course of 100 years in the Shrine of Resurrection.

Asclepius (Valkyrie Crusade) is the goddess of medicine, and has a miraculous rod that can raise the dead.

Mercy's (Overwatch) Resurrection ability can revive one dead teammate from the grave every 30 seconds. 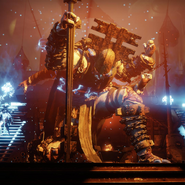 Fikrul the Fanatic (Destiny)
Add a photo to this gallery 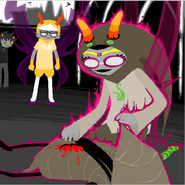 Feferi Peixes (Homestuck) resurrects someone fatally impaled in the stomach with her Witch of Life powers.

The Brothers Death (SCP Foundation) resurrected The Children of the Barrow from a mass grave of humans who died from the Black Death in Europe.
Add a photo to this gallery
Retrieved from "https://powerlisting.fandom.com/wiki/Resurrection?oldid=1344149"
Community content is available under CC-BY-SA unless otherwise noted.