"Returning from death seems to have abnormally widened my perspective. I used to translate words...but everything we touch, every movement we makes create information. Everything is a language, and I translate it all."
― Doug Ramsey/Cypher (Marvel Comics)

After being killed by Tommy Jarvis and resurrected by a bolt of lightning, Jason Voorhees (Friday the 13th) has developed... 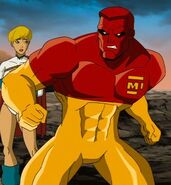 After being killed, Sung Jin-Woo (Solo Leveling) was brought back to life as a Player which allowed him to grow more powerful as a Hunter while leveling up like a video game character.

After being killed a second time, Yusuke Urameshi (Yu Yu Hakusho) underwent the Atavism of the Mazoku, becoming a more powerful half-demon.
Add a photo to this gallery
Retrieved from "https://powerlisting.fandom.com/wiki/Resurrection_Empowerment?oldid=1597903"
Community content is available under CC-BY-SA unless otherwise noted.