The power to retract one's own limbs. Sub-power of Turtle Physiology.

The user is able to retract their own limbs to avoid any incoming attacks making it look like their limbs have been cut off.

While using Gear Fourth - Boundman's elastic force, Monkey D. Luffy (One Piece) is able to produce shockwaves of air by retracting his legs. 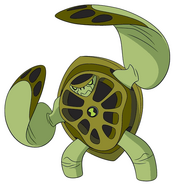 Terraspin (Ben 10 series)
Add a photo to this gallery
Retrieved from "https://powerlisting.fandom.com/wiki/Retractable_Limbs?oldid=1507438"
Community content is available under CC-BY-SA unless otherwise noted.