Scorpion (Mortal Kombat) uses his infamous technique, the "Stinger", against his arch-rival Sub-Zero.

"Holy...?! Since when do spiders have stingers??!?!"
― Peter Parker/Spider-Man after discovering his stingers (Marvel Comics)

The power to elongate and manipulate stingers. Variation of Natural Weaponry and Stinger Protrusion.

The user can generate, project, and manipulate stingers on a chain, rope or organic materials. The blade can be composed of energy or natural elements. 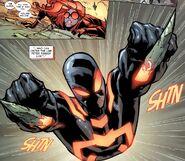 Jefferson Starships (Supernatural) are hybrids of various monsters including the Wraith and therefore possess some of their traits including retractable spikes.
Add a photo to this gallery
Retrieved from "https://powerlisting.fandom.com/wiki/Retractable_Stinger?oldid=1507439"
Community content is available under CC-BY-SA unless otherwise noted.