Doriate (Fairy Tail) can weaken the target's physical and magical abilities by turning them into children.

Reverse to earlier or original state.

The power to reverse anything and/or everything to the earlier or original state. Sub-power of Progress Manipulation.

The user can reverse anything and/or everything to an earlier or original state, they can weaken their opponents in different aspects by causing retrogression such as weakening their powers, their physical capabilities, reversing their age, return to their early memories, the user can also reverse time itself.

Josuke Higashikata’s (JoJo's Bizarre Adventure Part IV Diamonds are Unbreakable) Stand, Crazy Diamond, has the ability to restore anything it touches or punches into a previous state.

Ain (One Piece: Film Z) can reverse a person's or item's age by 12 years, thanks to the Modo Modo no Mi power. 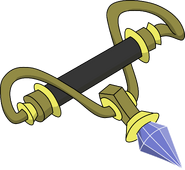 Rio Reverso (Xiaolin Showdown) can return objects back to their original form such as a wood chair back into a tree to a acorn.
Add a photo to this gallery
Retrieved from "https://powerlisting.fandom.com/wiki/Retrogression?oldid=1360167"
Community content is available under CC-BY-SA unless otherwise noted.