The Mandarin (Marvel Comics) possesses the ten Makluan rings which gives him powers.

The ability to become empowered by rings of energy or power. Technique of Ring Manipulation. Variation of Jewelry Empowerment.

The user is able to become empowered by wearing rings of various kinds, some which amplifies one's powers, some which can give superpowers, some can even give binding curses which grants them unearthly powers.

NICOLE the Holo-Lynx (Archie's Sonic the Hedgehog) has been empowered by a Red Star Ring, becoming Overclocked NICOLE.

The nine Power Rings (DC Comics) of the Lantern Corps. 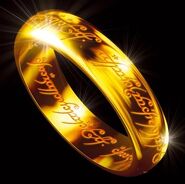 Power Rings of Inspiron (Air Buddies)
Add a photo to this gallery
Retrieved from "https://powerlisting.fandom.com/wiki/Ring_Empowerment?oldid=1332296"
Community content is available under CC-BY-SA unless otherwise noted.