The ability to gain strength from one time or consistent ritualistic practice. Variation of Affinity.

Users become stronger, faster, more durable, etc. from the ritualistic practice (human sacrifice, habitual feeding on a supernatural source of power, soul transfers, series of occultist actions, etc) of oneself and others, possibly unlocking abilities related to the affinity and enhancing the existing powers. Some users may be able to draw sustenance from rituals or even slow or stop aging.

Richard Wilkins (Buffy the Vampire Slayer) performed multiple rituals in order to become the embodiment of the Old One Olvikan.

...to unlock his full latent potential. 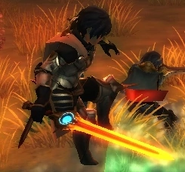 ...turning it into the Exalted Falchion.

Black Mass (Medieval Folklore) was a Satanic ritual that mocked the Church, often performed by traitorous clergy - could summon demons, sin and defilement in legend. 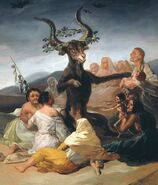 The Witches' Sabbath (Medieval Folklore) was a mass-gathering of witches and demons, to share knowledge and empower themselves with dark magic and hidden rituals.
Add a photo to this gallery
Retrieved from "https://powerlisting.fandom.com/wiki/Ritual_Empowerment?oldid=1556112"
Community content is available under CC-BY-SA unless otherwise noted.