The power to draw strength from rivalries. Variation of Affinity.

The user becomes stronger, faster, more durable, etc. from their rivalries with others, possibly unlocking abilities related to the affinity and enhancing their existing powers. Some users may be able to draw sustenance from the rivalries or even slow or stop aging. 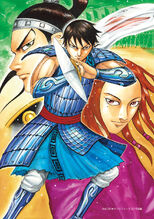 The Young Captains of the State of Qin (Kingdom)

Kou Yoku of the Thunder (top right) and Haku Rei, the holder of the 3rd seat of the Ten Bows of China (bottom left) (Kingdom)

Kyoya Tategami (Beyblade)
Add a photo to this gallery
Retrieved from "https://powerlisting.fandom.com/wiki/Rivalry_Empowerment?oldid=1421278"
Community content is available under CC-BY-SA unless otherwise noted.