The ability to utilize robotic arm. Sub-power of Bionic Physiology.

Some robotic arms are to be assembled or disassembled to various forms of technology, allowing the user to perform system checks, enhancements, and upgrades.

In some cases, users would may possess at least one, two, or even multiple artificial arms, with possibly each of them may possessing a variety of functions, whether for battle, or not for battle. 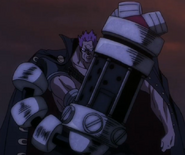 James Ironwood (RWBY) displaying his cybernetic augmentations, including his arm.
Add a photo to this gallery
Retrieved from "https://powerlisting.fandom.com/wiki/Robot_Arm?oldid=1350344"
Community content is available under CC-BY-SA unless otherwise noted.