Magneto (X-Men: Days of Future Past) controlling a Sentinel.

"Whether it's one robot or one-hundred, the Deadly Six and I can command them all."
― Zavok (Sonic the Hedgehog IDW)

The power to manipulate robots and cyborgs. Variation of Technology Manipulation.

User can control robotic entities such as robots, cyborgs, mechs/mechas, gynoids, rovers, androids, animatronics, automatons, biobots, bionics, nanobots, software agents, internet bots and more to do their bidding or fight for them as well as empathize and communicate with them.

The Deadly Six (Sonic Lost World) are able to control robots like Eggman's Badniks through manipulation of magnetic fields.

Lyric (Sonic Boom), controls robots by pressing a blue button on his chest. 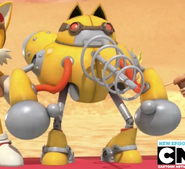 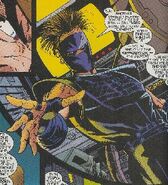 Bastion (Marvel Comics) is a transorganic mechanoid with near-limitless robotic manipulation and fabrication. He can even transform human beings into sentinel minions.