Bernie Hedgehog (Archie's Sonic the Hedgehog) being transformed into a robot by the evil Dr. Robotnik.

Turn anything into robots

"You're probably asking yourself, 'But don't I need clean air to live?' Why, of course you don't; not with Dr. Eggman's all-inclusive Robotomy Treatment, that is! Perks include never having to eat, sleep, or think ever again. That's what we call 'living the good life!'"
― Dr. Eggman (Sonic Forces)

The power to transform anything into robots. Variation of Conversion and Technology Transmutation. Opposite to Deroboticization.

The user has the ability to convert any biological or elemental matter with free will into a mindless robot or machines. They can roboticize anything they desire, converting their flesh and bone into circuitry and programming code, and in many cases of doing so, utterly destroying any free will the victim once had.

The Roboticized Masters (Archie's Sonic the Hedgehog) were created with this process.

For a time, Dr. Eggman (Archie's Sonic the Hedgehog) had the power to roboticize others through his touch. 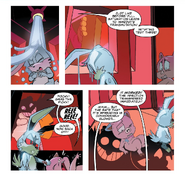 A Pocky and Picky (Sonic the Hedgehog IDW), being infected with the Metal Virus, an artificial virus created by Dr. Eggman that roboticizes organic matter.

Rough and Tumble (IDW's Sonic the Hedgehog) have been roboticized by the Metal Virus, becoming Zombots.

With "the Nexus", the Vex (Destiny) can turn any planet into machines.

A Cyber conversion in progress (Doctor Who)

The Destructinator (The Fairly OddParents) roboticizes the entire planet Earth and all life forms standing on its grounds.

Franky (One Piece) has converted himself into a powerful and advanced cyborg.

Dr. Nefarious (Ratchet and Clank) plots to destroy all organic life in the galaxy... 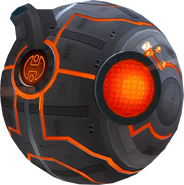 ...using the Biobliterator, a superweapon specifically designed to roboticize them.

The Time Eater (Sonic the Hedgehog) has been converted to part machine by Eggman.

John Connor (Terminator Genisys) was infected with a nanobot resin by Skynet, transforming him into the T-3000.

...turning him into a robotic werewolf known as the Wirewolf.
Add a photo to this gallery
Retrieved from "https://powerlisting.fandom.com/wiki/Robotization?oldid=1332275"
Community content is available under CC-BY-SA unless otherwise noted.