User can create, shape and manipulate the rotational energy, i.e., the energy  produced when an object rotates along a single axis. Whenever an object spins around a center of rotation, rotational energy is created. This is a fraction of the total amount of its kinetic energy. During rotation, every part of the object that is away from the axis has motion, thus each part has kinetic energy. The moment of inertia is an object’s tendency to resist angular acceleration (rotational acceleration). It controls its spinning rate. An object with more mass at the center has a lower moment of inertia, and the lower its moment of inertia, the faster its rotation. 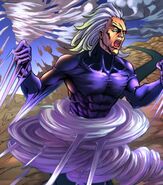