Vecna (AD&D) has surpassed the rules of reality, allowing him to accomplish things that were thought to be all but impossible, like escape from "Ravenloft", enter "Sigil" even though gods are forbidden from entering, and more.

Transcend the rules of reality.

"and now I think I'm sort of unstuck in existence. Like I'm not fully a part of reality anymore or bound by the rules governing it."
― John Egbert (Homestuck)

The power to surpass the rules of reality. Sub-power of Freedom and Reality Separation. Advanced variation of Living Anomaly.

User can transcend any/all laws/rules that make up reality, instead of breaking the rules of any system, they are out in out surpassing them, for example, say there is an ironclad rule that states that no matter one does, they can't go above a certain rank of divinity, but with this, they can transcend that and reach the status of an almighty being or escape from a place that not only has no exits, but inhabitants can actually force them to stay the user could not only escape but even prevent themselves from being taken back.

See Also: Beyond The Impossible 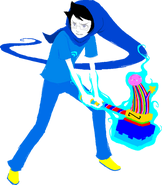 After touching the Treasure, John Egbert (Homestuck) became unstuck from canon, being unbound by reality or the laws that govern it, including the tides of causality and fate, allowing him to change the meta-narrative and being immune to literal glitches in existence.
Add a photo to this gallery
Retrieved from "https://powerlisting.fandom.com/wiki/Rule_Transcendence?oldid=1754453"
Community content is available under CC-BY-SA unless otherwise noted.