Engineers (Prometheus) can create new life by offering their own.

The power to create life through sacrifice.

The user can create new or existing lifeforms through sacrificing a piece of oneself, like blood, flesh or even the own life.

Ormagöden (Brütal Legend) was a raging fire beast whose death created the Realm of Metal how it is today. His metal-flesh embedded itself into the ground filling it with ore, his blood became the oceans, his fire became the sun and his noise was so epic that it echoes to this day. 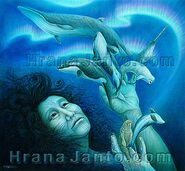 Johann & Pheles (Shakugan No Shana) sacrificed all their power of existence in order to bring their son Justus into the world.

Rose Quartz (Steven Universe) gave up her physical form to bring her son Steven Universe into the world.
Add a photo to this gallery
Retrieved from "https://powerlisting.fandom.com/wiki/Sacrificial_Creation?oldid=1391723"
Community content is available under CC-BY-SA unless otherwise noted.