Voldemort (Harry Potter) use the most forbidden dark magic which involved sacrficing people to mutilate his soul to create Horcruxes for immortality.

Use sacrificial magic.
The power to utilize magic pertaining to sacrifice/sacrificial offerings. Form of Magic. Variation of Sacrificial Power.

The user is able to utilize a form of magic associated with sacrifices. By making offerings, they can obtain mystical abilities like manipulating supernatural energies and/or spell casting.

By sacrificing the House of Erebus, Deacon Frost (Blade) became the avatar of La Magra.

The potion Voldemort (Harry Potter) used to regain his body required his servant to willingly sacrifice a piece of flesh as one of the three ingredients. 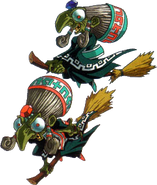 Twinrova (The Legend of Zelda: Oracle of Ages and Oracle of Seasons) sought to sacrifice Princess Zelda to resurrect Ganon, but due to Link's interference, they were forced to sacrifice themselves instead.

Tzekel-Kan (The Road to El Dorado)