Control the "wheel of life".

The ability to control the 'wheel of life' within living beings. Variation of Cycle Manipulation and Life and Death Manipulation.

User can control/manipulate the samsara: the wheel/cycle of life: cycle of birth, life, death, rebirth and the effects time has on living beings. Making the old young and young old, healing others, killing others and even changing their own life.

Taisuke Kanō (Alive: The Final Evolution) can generate heat for a "Destruction and Rebirth" effect.

The Soul King (Bleach) regulates the flow of souls between the worlds, allowing for life, death, and rebirth to happen. Without this balance, life and death would merge together.

The Sage of Six Paths (Naruto) can utilize Yin-Yang to create all creations and return them to nothingness.

Nagato (Naruto) possessing Madara's Rinnegan, can imbue life back to the dead.

Obito Uchiha (Naruto) taking Madara's left Rinnegan, can give his own life to another, the intent being Madara's undead form. 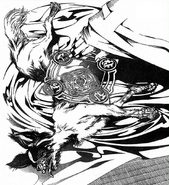 Sōhaku Kago (Tenjho Tenge) utilizing the Flaming Dragon's Gate to redirect the flow of life force, resurrecting the dead and keeping himself and others alive for centuries.

The Phoenix Force can give existence and erase it when it served its purpose.

Chernobog (Valkyrie Crusade) as the goddess of life and death, can control the cycle of life.

The Traveler (Destiny) is capable of manipulating Life Death and Rebirth for anyone who receives it's Light.
Add a photo to this gallery
Retrieved from "https://powerlisting.fandom.com/wiki/Samsara_Manipulation?oldid=1378586"
Community content is available under CC-BY-SA unless otherwise noted.