"As long as there is sand, anything is possible."
― Gaara (Naruto)

The power to manipulate sand. Variation of Earth Manipulation.

Crocodile (One Piece) has trained his Suna Suna no Mi powers to be powerful enough to turn nearly anything he comes in contact into sand as well as transform into sand by reflex.

Shukaku (Naruto) can manipulate sand, and the cursed seal on its body allows it to add a seal within any sand binding constructs.

Sandman (Marvel Comics) can transform his body into sand, harden it to enhance his durability and shape his hands into weapons. 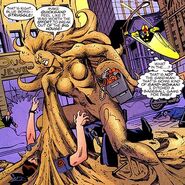 Ajeel Ramal (Fairy Tail) is a master of Sand Magic on a monstrous level.

The Desert Glass (Steven Universe) is a corrupted gem that constructs sandstorms and structures whenever it touches a large body of sand.

Pearl (Steven Universe) can manipulate sand, using it to demonstrate the mechanics of fusion.

The Sandman (Rise of the Guardians) has power over a magical sand that he creates constructs and gives people good dreams with it.

Pitch Black (Rise of the Guardians) can corrupt the Sandman's sand, turning it black, taking control of it and use it to give people nightmares.
Add a photo to this gallery
Retrieved from "https://powerlisting.fandom.com/wiki/Sand_Manipulation?oldid=1412715"
Community content is available under CC-BY-SA unless otherwise noted.