User is made up of or can transform their body completely into sand. Users' transformed form is anatomically identical to their normal form, aside of being made of sand, in which case it contains all to organs and is somewhat vulnerable to attacks. Alternately the user can transform into homogeneous matter, without any part of their form being more important than the other.

While sand lacks the raw power and durability of stone and metal, it more than makes up with flexibility. User can manipulate their form with ease rivaling Water Mimicry, being able to shift from solid to sand-cloud, form weapons or scatter themselves over vast areas. 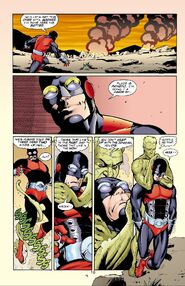 Sanderson Hawkins/Sand (DC Comics) has the ability to transform into a malleable sand-like substance.

Sandy Mandy (The Disrespectoids) is composed of sand.

Ajeel Ramal (Fairy Tail) can turn his body into sand including other objects.

Sunshine (Kinnikuman) is composed of sand and can reassemble into other forms, like a pyramid. 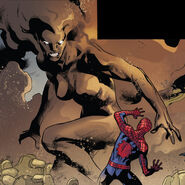 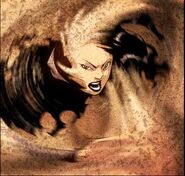 Sooraya Qadir/Dust (Marvel Comics) turning herself into a sandstorm, causing heavy damage and resistance to physical and telepathic attacks.

Shukaku (Naruto) is a tanuki (Racoon dog) composed of compact sand, allowing him to take debilitating hits without bleeding.

Gaara (Naruto) deconstructing his own body into sand, granting him invulnerability to attacks and flight.

After eating the Sand Sand Fruit/Suna Suna no Mi, Crocodile (One Piece) can transform his body into an intangible sand. 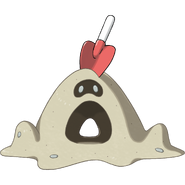 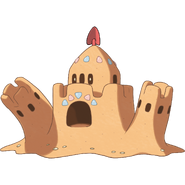 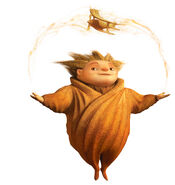 Sanderson Mansnoozie (Rise of the Guardians) has a body completely composed of his own dream-sand, hence his position as Sandman.

The area marked SCP-777 - Kingdom of Sand (SCP Foundation) will form animal-like constructs of sand and attack any human within range if any liquid touch the ground.

Hinnagami (Valkyrie Crusade) is a living doll made of dust.

DesertMan.EXE (Mega Man Battle Network 3)
Add a photo to this gallery
Retrieved from "https://powerlisting.fandom.com/wiki/Sand_Mimicry?oldid=1542946"
Community content is available under CC-BY-SA unless otherwise noted.