Song (The Flash) after getting struck by the Dark Matter from the Particle Accelerator explosion, fused him with the Dark Star Satellite he was stationed in.

Mimic the aspects of a satellite.

The power to become or mimic the characteristics of a satellite. Technique of Satellite Manipulation. Variation of Vehicle Physiology.

The user is able to become or mimic satellite enabling the centripetal observational orbit of global astral bodies. They may have the traits of a monitoring station with surveillance and computer programming capacity, military stealth satellite with weaponry, shielding and microelectronic-counter relays to avoid detection, etc.

Soundwave (Transformers: Revenge of The Fallen) as a parasitic satellite.

Anne-Droid V2.1 (Stretch Panic) was transmorphed into a living Satellite by the Demons of Vanity. 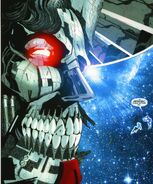 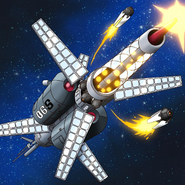 The Satellite Monster Series (Yu-Gi-Oh!)
Add a photo to this gallery
Retrieved from "https://powerlisting.fandom.com/wiki/Satellite_Physiology?oldid=1041199"
Community content is available under CC-BY-SA unless otherwise noted.