A weapon of the tuned known as the Solid Wing (Battle Angel Alita) can control and project EM Scalar rays for various uses.

The user can create, shape and manipulate scalar waves, a compact impermissible forces dubbed as a MCE (more complete electromagnetic) equation produced when two out of phase em waves, carrying instantaneous high-output force via their anti-parallel oscillation forces originating from opposite charge sources, of the same frequency collide. Their subtracted amplitudes canceling out and/or destroying on another.

Instead of annihilation however, these forces instead begin their transition of energy back into a scalar wave, reverting to a vacuum state of infinite potentiality again. Due to their lacking net directionality, scalar waves are conjugates of each other, which, when left unperturbed, can pass through ordinary matter with relative ease without negatively effecting everything around it. Clinically wise these waves can affect more than just militia practices, as they can also be utilized for medicinal, neurological and meteoric appellation.

Such as augmenting health and curing disease; even reversing the effects of aging. While psychologically they double as an effective mind controlling utensil, utilizing radio waves and Wi-Fi to broadcast mind warping signals directly into the brains of those who operate most forms of entertainment property. It has been theorized they can even alternate climate and weather patterns via direct geomagnetic interactions. 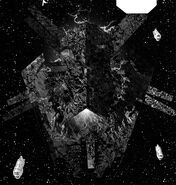 The Sword of Damocles (Battle Angel Alita: Last Order) a cadre of stealth orbital satellites which can attack with tramendous force at several times the speed of light.
Add a photo to this gallery
Retrieved from "https://powerlisting.fandom.com/wiki/Scalar_Wave_Manipulation?oldid=1735295"
Community content is available under CC-BY-SA unless otherwise noted.