An example of a Scarecrow.

Use the traits of a scarecrow.

Ability to use the abilities of all types of scarecrow. Technique of Scarecrow Manipulation. Variation of Cryptid Physiology and Mannequin Mimicry.

The user is or has the ability to take on the form of a scarecrow, which are connected to harvest, fear and (oddly enough) wisdom and knowledge, often also the inability to actually do anything. Much of their abilities relate to their near-weightless and non-living form, which gives them several abilities, but also the fatal weakness to fire.

Some may use farm equipment as weapons, including pitchforks, sickles, scythes, etc, or sometimes even shotguns.

Possessed and animated by Cult influences, the Possessed Scarecrows (New Blood Interactive's DUSK) serve as one of the Cult's minions, and they are always armed with super shotguns as opposed to using farm equipment as their own weaponry. 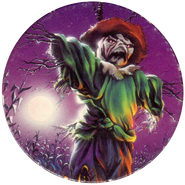 A farmer named Stanley used magic to bring his scarecrows (Goosebumps) to life so they would keep birds from eating his crops and he wouldn't have to work so hard.

Fiddlesticks, the Harbinger of Doom (League of Legends) 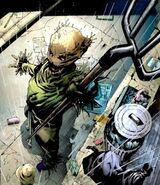 Cacturne (Pokémon) is the evolved form of Cacnea and is known as the scarecrow Pokémon.

Guardian ÄRM, Scarecrow (Marchen Awakens Romance) brings out a crucified scarecrow. This guardian is very rare and sought by many because of its ability to paralyze those who gaze into its eyes.

The Living Scarecrow (Mona the Vampire) is a grotesque, powerful and a tall animated Scarecrow that is capable of turning innocent people into Zombies by feeding on their brains. 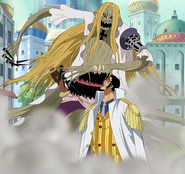 Basil Hawkins (One Piece) attacking Kizaru in his Goma no So transformation state. 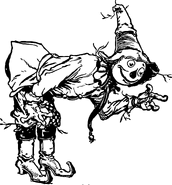 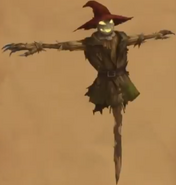 A lone Scarecrow from MediEvil (PS4) 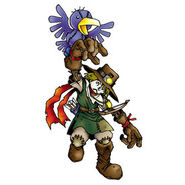 Rook (Screaming Soup!) is a living scarecrow who loves pulling annoying pranks on anyone he crosses paths with. 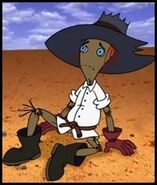 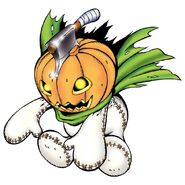