A Shapeshifter (Shadow Falls) changes their scent by transforming into another animal.

"You're blocking my scent with yours!? Th- that doesn't even make sense!"
"I'm Exalted! I just smell that good."
― Alchemical and Marena (Keychain of Creation)

The user can manipulate their own bodily scent, allowing them to evade and trick users of Enhanced Smell. 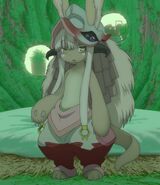 Nanachis (Made In Abyss) bodily scent was completely changed from a foul smelling odor similar to rotting garbage, into a nice, sweet and irresistible odor after she was transformed into a Narehate.
Add a photo to this gallery
Retrieved from "https://powerlisting.fandom.com/wiki/Scent_Shifting?oldid=1446827"
Community content is available under CC-BY-SA unless otherwise noted.