The power to combine science and magic. Combination of Magic and Science Manipulation. Variation of Power Mixture. 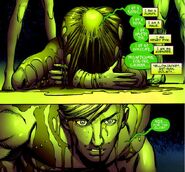 A Skrull (Marvel Comics) undergoing the Infiltration Ritual, a mixture of science and magic that imbues them with the powers and memories of a selected subject; thus, while shapeshifted, the Skrulls are rendered undetectable by Iron Man's technology, Spider-Man's spider-sense, Professor X's telepathy, Wolverine's animal senses, and any other conceivable forms of detection.

The Sword of Tengu (Teenage Mutant Ninja Turtles) was forged by combining Earth sorcery and Utrom technology.
Add a photo to this gallery
Retrieved from "https://powerlisting.fandom.com/wiki/Science-Magic_Mixture?oldid=846646"
Community content is available under CC-BY-SA unless otherwise noted.