The laws of Science.

The power to manipulate laws of science. Opposite to Magic.

science (from Latin scientia, meaning "knowledge") is the ability to be intellectual and the practical activity of encompassing the systematic study of the structure and behavior of the physical and natural world through observation and experiment. Science has been known as the only true way to acquire knowledge about reality and the nature of things.

The user can manipulate the laws of Nature/Science through a mundane method that manipulates reality to whatever effect they desire which can be interpreted as "super-science". The power of science does not obey the conventional laws of physics, since it created it, and can do whatever it wants with it.

This power is not a factual term used by scientists, but super-science that is used by great, powerful scholarly beings. The user manipulates something known as super-science which stimulates defiance against it's own laws of physics/logic/nature/science or physical/scientific laws with a scientific basis. Super-science is an almighty power with no limit and that may produce similar effects like Magic though they are major reactants. It is one of the four category and umbrella powers that guide all the others powers such as the Divine, Magic and Philosophy.

These are different types of science methodology to examine, prioritize and formulate theories about the laws of nature/science.

Classifying sciences involves arbitrary decisions because the universe is not easily split into separate compartments. There are numerous fields of the sciences: 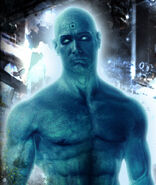 Doctor Manhattan (DC comics) is a master of this ability.
Father1.JPG
Father (Fullmetal Alchemist) is the one who evolved the FMA universe

Baron Karsa (Marvel) was the chief scientist of Homeworld.

Mister Mxyzptlk (DC comics) can manipulate the properties of his dimension in the form of "super-science".

Batmite (DC comics) can manipulate the properties of his dimension in the form of "super-science".

The Joker, (DC comics) after hijacking Mister Mxyzptlk's powers.
Anti-Life Equation.png
The Anti-Life Equation which can only be used by 12th level intellects to manifest equations that twist reality

Brainiac (DC comics) has a 12th level intellect, which is deemed the highest form.

Celestials (Marvel) are an ancient cosmic race that used their godlike abilities for experimentation, which is responsible for the offshoot of many races.
Add a photo to this gallery
Retrieved from "https://powerlisting.fandom.com/wiki/Science_Manipulation?oldid=858716"
Community content is available under CC-BY-SA unless otherwise noted.