Use the traits of a scientific entity.

User with this ability either is or can transform into a Scientific Entity, being that is scientifically and technologically advanced, especially in the areas of cybernetics, genetic manipulation, research, and experimentation. They apply science to everything they do and lack belief in magical or divine powers. The user can become a scientific entity that manipulates the laws of science since scientific beings are proficient at manipulating and utilizing science.

Three representatives of the Isu(Assassin's Creed): Juno, Minerva, and Jupiter. 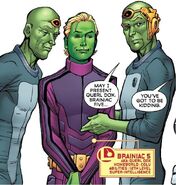 ...the Brainiac Family are some of the most infamous/famous members of the Coluan race as each member possesses a superior intellect on the order of 12th-level...

…Generally believed to be the most intelligent being in the DC Universe, Vril Dox I/Brainiac I possess a 12 level intellect that surpasses even the likes of Lex Luthor and Superman…

...the clone son of Brainiac I, Vril Dox II/Brainiac 2 is regarded as Brainiac's son and heir, as he has inherited his pater familias' high intelligence and extreme Machiavellian ethics... 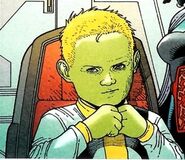 ...a brilliant man who strove to atone for his family's history of evil acts, Kajz Dox/Brainiac 4 was one of the 30th century's greatest scientists...

...Possessing superhuman calculation skills, amazing memory, and exceptional technical know-how, Querl Dox/Brainiac 5 is a prodigy even among his own family due to his 12th level intellect.

Celestials (Marvel Comics) are an ancient cosmic race that used their godlike abilities for experimentation, which is responsible for the offshoot of many races.

Lex Luthor and Brainiac finally become one - Justice League Unlimited
Add a photo to this gallery
Retrieved from "https://powerlisting.fandom.com/wiki/Scientific_Entity_Physiology?oldid=1704838"
Community content is available under CC-BY-SA unless otherwise noted.