The ability to wield or create scientific weapons. Sub-power of Advanced Technology and. Opposite to Magic Weaponry.

Users are able to create or wield various forms of science-based weaponry (including chemical or biological) that suit their needs in battle whether they be offensive or defensive. The weapons are more advanced technology that often yields impressive results. Due to the weapons being powered by plasma and/or other scientific achievements, they also act as a blank slate for different kinds of weapon-based abilities.

Doraemon, and Gigazombie (Doraemon: Nobita and the Birth of Japan 2016) wield advanced scientific weaponry from the future.

Caesar Clown (One Piece) is the leading expert on chemical weapons for biological warfare...

...such as the Shinokuni poison gas... 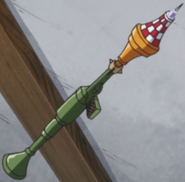 ...and the KX Launcher with poison deadly enough to kill a Yonko.

Franky's (One Piece) cyborg body has a wide arsenal of scientific weapons such as Laser Beams...

Germa 66 (One Piece) is an army equipped with various gadgets and advanced weaponry for scientific warfare.

A resourceful chemist, Usopp (One Piece) has created a diverse array of chemical pellets for long-range combat.

Genos (One Punch Man) has advanced cybernetic artillery installed in his bionic body.

Azazel (Highschool DxD) is the leading expert on researching Sacred Gears and has created artificial Sacred Gears such as the Downfall Dragon Spear.

How Vader and Boba Fett Fought Each Other in LIGHTSABER Combat! (Legends)