Kirihime Natsuno (Dog & Scissors) has used her Hasajiro to combat against weapons such as chainsaws.

"These are really good scissors."
― Homer SImpson after cutting a bridges wires (The Simpsons)

The ability to wield scissors with supernatural accuracy and proficiency. Variation of Improbable Weapon Proficiency. Not to be confused with Scissor Protrusion.

User can use a pair of scissors as a melee weapon with supernatural accuracy and proficiency, as effective as swordsmen utilizing swords or gunmen using firearms. They can wield scissors as though they are extensions of their body parts, easily slicing through steel and other defensive materials, dependent on the weapon's sharpness and the user's strength, without causing recoil damage to the weapon. Defensively, the user can block and deflect attacks, even cut up projectiles in mid-flight.

The scissors may also be disconnected at the joints, becoming dual blades that the user can wield as swords or scythes, depending on whether the scissors are straight-edged or curved. If innovative enough, the user can add an elastic string between the two blades for a makeshift slingshot, or throw the scissors with amazing accuracy.

Sheele (Akame Ga Kill!) using Cutter of Creation: Extase with great dexterity, allowing her to cut through any material.

OVER (Bobobo-bo Bo-bobo) uses his giant scissors to ruthlessly slice his opponents apart.

Phantom (Grindhouse and Watercolors) weilds a pair of silver scissors that can sever life, not unlike the Grim Reaper's scythes in more common folklore.

Gon Freecss (Hunter x Hunter) using his Scissor to create a spiritual scissor to skillfully slice through his targets.

Ryūko Matoi (Kill la Kill) wielding the Rending Scissors with great skill, even when split apart, as a tennis racket or a dual-ended scythe.

Gekko Moriah (One Piece) wielding a giant pair of scissors to cut shadows even in battle, and splitting them at the joint into dual swords.

Jack the Ripper (Record of Ragnarok)

Otoya Takechi (Riddle Story of Devil) wields scissors as efficiently as swords and defeated even gunmen with them. 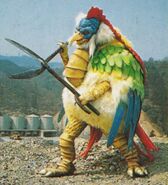 Seven/Killer Seven using his scissors to parry a attack from Thirteen(Scissor Seven)
Add a photo to this gallery
Retrieved from "https://powerlisting.fandom.com/wiki/Scissors_Proficiency?oldid=1566095"
Community content is available under CC-BY-SA unless otherwise noted.