Terunosuke Miyamoto's Stand, Enigma (JoJo’s Bizarre Adventure Part IV Diamonds are Unbreakable) allows him to seal pretty much anything, including himself, in paper.

Seal objects into another object.

"So uh, I'm Aatrox. I'm a transcendental being trapped inside cutlery... What's your deal?"
― Aatrox, The Darkin Blade (League of Legends)

The ability to seal objects into another object. Variation of Dimensional Storage.

The user is able seal objects like living beings, spells, tools and/or weapons, etc. within another object or person and release them when needed. If the sealed object has a power of its own (Mythic Physiology, Powerful Objects, etc.) possessor may be able to tap into that power.

Eshi (D.Gray-Man) forming chains out of dark matter, which is strong enough to seal away even Innocence abilities.

Dante Alighieri (Dante's Inferno) defeats Lucifer by resealing him in his bodily prison.

Mutaito (Dragon Ball) using the Evil Sealing Wave to seal King Piccolo into an electrical rice cooker at the cost of his own life.

Garlic Jr. (Dragon Ball) opens the Dead Zone, sealing anything that it sucks in, ironically his immortal self.

Enraged after their fight ended as a stalemate, Halloween (Marchen Awakens Romance) decided to humiliate Alan by using his Darkness ÄRM, Igneal to seal him inside Edward the Dog.

Danzō Shimura (Naruto) using the Reverse Tetragram Sealing Jutsu/Reverse Four Symbols Sealing Technique to absorb everything into his own body and seal them away as his last resort.

Nagato/Pain (Naruto) using the Planetary Devastation/Chibaku Tensei, which seals the target into a pile of debris that forms into a celestial body.

The Jinchūriki (Naruto) are people who have tailed beasts sealed into them. 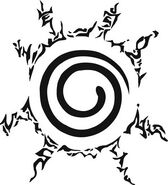 ...sealed Kurama, the Nine-Tailed Fox inside Naruto Uzumaki after his birth.

Tenten (Naruto) seal weapons inside of her scrolls. 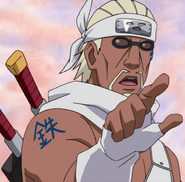 Kumagawa's Book Maker (Medaka Box) has the special ability to seal away all kinds of abilities a person has.

Fiona Thyme (RWBY) sealing a military truck into her body.

Taoist (Valkyrie Crusade) sealed demons within her talismans, using them as weapons.

Bookend (Valkyrie Crusade) seals demons in a book she uses to banish demonkind, using their powers against themselves.

The Treasure (Homestuck) is a literal plot hole in the comic with the ability to seal others with Metatextual Attraction, overwriting their powers and imprisoning the victims in the harrowing nexus between canon, post-canon, non-canon, outside the canon, and fanon.

Lumiere Fruit (True Blood) It seems the magical fruit keeps the Fairy bound to the land where there is no perception of time lost.
Community content is available under CC-BY-SA unless otherwise noted.