Emma Frost's (Marvel Comics) Diamond Form is the product of her secondary mutation.

"It does not stop at a mere single mutation... the form I've been promised is more beautiful than even that... They tell me I will float through the air and strike at the foes of our biomass with my mind... with our mind... my cup runneth over..."
― William Diego, hinting he will eventually become a Psi Reaver. (System Shock 2)

The power to undergo secondary mutations. Technique of Mutant Physiology.

User who has already been mutated in some way develops a "secondary mutation," often gaining new powers or expansions on their existing ones. In some cases, the user's body mutates even further as well.

The secondary mutations can either be naturally or artificially induced. 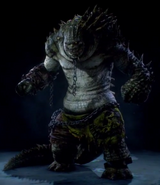 Mohinder (Heroes) mutates after injecting himself with a faulty formula to gain an ability.

Daxter (Jak and Daxter series) was first transformed into an ottsel by exposure to Dark Eco, and further exposure granted him the power to transform into Dark Daxter.

Warren Worthington III/Angel (Marvel Comics) gained Healing Blood from his secondary mutation, a phenomenon experienced by several other mutants like him, in which they gain new powers and/or appearances. 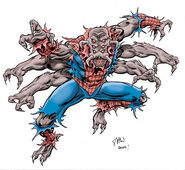 After the original spider bite that gave him his powers, Peter Parker/Spider-Man (Spider-Man: The Animated Series) eventually began to mutate further, becoming the monstrous Man-Spider.
Gonome.jpg
Under mysterious circumstances, the Zombies (Hλlf-Life series) can mutate into full-fledged Gonomes. 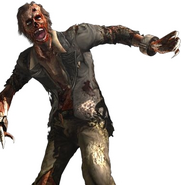 Depending on the virus strain in their bodies, Zombies (Resident Evil series) can either micromutate into either Crimson Heads...

...or mutate into Lickers.

After first becoming a vampire, Michael Morbius (Spider-Man: The Animated Series) was transformed into a giant bat after being exposed to the Neogenic Recombinator.

The Ninja Turtles (Teenage Mutant Ninja Turtles 1987 TV series), have developed further mutations that cause them to transform into monstrous hulks with superhuman strength, lowered intelligence, and increased aggression.

Donatello (Teenage Mutant Ninja Turtles 2003 TV series) underwent a secondary mutation after being stung by one of the S-Gray Mutants. 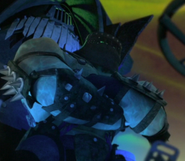 In the Mutant Apocalypse timeline, Leonardo (Teenage Mutant Ninja Turtles 2012 TV series) became the super-mutant Maximus Kong after being caught in the explosion of a mutagen bomb. 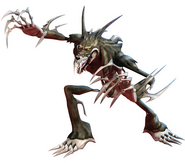 Chaos (Sonic the Hedgehog) was once a normal Chao, but was mutated into his current form by prolonged exposure to Chaos Energy.
Add a photo to this gallery
Retrieved from "https://powerlisting.fandom.com/wiki/Secondary_Mutation?oldid=1344194"
Community content is available under CC-BY-SA unless otherwise noted.