After becoming a vampire and stealing the Forgotten One's power, Gabriel Belmont/Dracula (Castlevania: Lords of Shadow) became immortal and near-invulnerable; only the Vampire Killer can truly kill him.

The user possesses near-complete immortality: they don't age, can rapidly heal from wounds, and will essentially live forever. However, there are exceptions to their immortality, with some factors being able to harm and ultimately kill them. 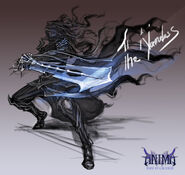 The Nameless (Anima: Beyond Fantasy) cannot die no matter how much his body or soul its destroyed or damaged, only divine entities can ultimately eradicate him.

While he can be put out of commission and incapacitated, Jason Voorhees (Friday the 13th) will eventually resurrect each time unless killed by one of his own family members...

...such as his niece Jessica Kimble.

Due to the curse placed on him, Baldur (God of War 2018) is immortal and invulnerable to all physical and magical threats, except for mistletoe.

No matter how much Kain (Legacy of Kain) is damaged or decomposes into bats, only the Soul Reaver can truly kill him due to his nature as the Scion of Balance.
Add a photo to this gallery
Retrieved from "https://powerlisting.fandom.com/wiki/Selective_Immortality?oldid=1560127"
Community content is available under CC-BY-SA unless otherwise noted.