Become invisible to anyone user chooses.

The ability to become invisible to anyone user chooses. Variation of Invisibility.

The user can become invisible to anyone they choose, meaning that some can see them and some can not. This may also apply to technological systems like motion sensors and thermal detectors and monitoring devices like cameras.

The Entity/"It" (It Follows) is invisible to all but those it hunts, both past and present. 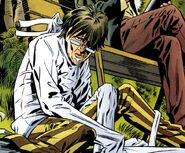 Writer's Block (Fables) can only be noticed or acknowledged by those with direct contact with him, having tailed his brother Kevin Thorn without him noticing.

Shinichi Tamaki (Yamada-kun & The Seven Witches) could make himself selectively invisible to anyone he kissed.

...However, after Savitar was freed from the Speed Force, Savitar was no longer invisible, as evidenced when he showed up on Team Flash's surveillance camera.
Add a photo to this gallery
Retrieved from "https://powerlisting.fandom.com/wiki/Selective_Invisibility?oldid=1714807"
Community content is available under CC-BY-SA unless otherwise noted.