Have a super-powered body part.

"He's got way too much confidence in his right hand. This isn't good!! I've got a really bad feeling about that right hand of his!!"
― Josuke Higashikata on Okuyasu Nijimura's The Hand (JoJo's Bizarre Adventure Part IV: Diamond is Unbreakable)

The ability to possess at least one super-powered body part. Sub-power of Supernatural Bodily Aspects.

The user possesses at least one body part that possesses supernatural powers.

Fiamma of the Right (A Certain Magical Index) is born with the power of the Right Hand within Christianity known as Holy Right; which is claim by Fiamma to "create miracles and destroy all evil outright".

Kamijou Touma (A Certain Magical Index) was born with a mysterious power in his right hand known as Imagine Breaker; that lets him negate anything supernatural such as esper powers, magic powers, and even to his own speculation, God's miracles.

Kamisato Kakeru (A Certain Magical Index) gains the mysterious power in his right hand known as World Rejector; formed from the desires of magicians to abandon and escape the current world, it allows him to erase individuals with conflicting desires and their creations, and cast them into a 'new world'.

Kenshiro (Fist of the North Star) poking fun at an Asura assassin.

Scar's (Fullmetal Alchemist) right arm enables him to destroy anything he touches.

By using her "Autosuggestion", Ayase Kurogiri (Keijo!!!), can bestow light and power to her butt.

Chimera (Marchen Awakens Romance) cursed her arms with multiple Ghost ÄRMs, allowing her to change them into a variety of forms.

Cursing their hands with the Ghost ÄRM, Scalpel has given the Flat Sisters (Marchen Awakens Romance) the power to change them into blades.

General's (Marchen Awakens Romance) arm is cursed with the Ghost ÄRM, Gentatsu, and can change form depending on the side Pause's Ghost ÄRM, Verfile lands on.

By using Gear Third - Bone Balloon, Busoshoku/Armament Haki - Koka, or both, Monkey D. Luffy (One Piece) can empower any part of his body.

Sanji (One Piece) using Busoshoku/Armament Haki - Koka to empower his legs.
Add a photo to this gallery

Ragna the Bloodedge's (BlazBlue) right arm is an Azure Grimoire, a fragment of the Black Beast that enables him to manipulate seithr.

Akande Ogundimu/Doomfist (Overwatch) possesses a powerful and technological gauntlet that gives him enough power to level a skyscraper... 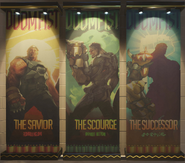 ...and inherited the title of "Doomfist".

Lann (World of Final Fantasy) wields the power to tame and summon Mirages in his left hand...

...while his twin sister Reynn wields the same power in her right.
Add a photo to this gallery
Retrieved from "https://powerlisting.fandom.com/wiki/Selective_Limb_Empowerment?oldid=1618694"
Community content is available under CC-BY-SA unless otherwise noted.