The power to alter and change aspects of one's own aura. Sub-power of Aura Manipulation.

The user is able to see, change and manipulate their own aura. This is done by changing certain qualities of the aura and morphing or shifting certain attributes of the aura to something different. For example, they could change their mood by shifting the color of their aura. Their health can also be altered, as giving themselves a glowing aura would give perfect health. If they possess other powers, they can change them as well by manipulating their aura. 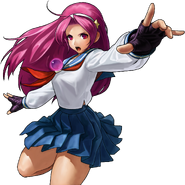 Athena Asamiya (King of Fighters)
Add a photo to this gallery
Retrieved from "https://powerlisting.fandom.com/wiki/Self-Aura_Manipulation?oldid=822231"
Community content is available under CC-BY-SA unless otherwise noted.