With the aid of the Double Gear System, Mega Man (Mega Man series) can access Double Gear to increase his speed and attack power at the same time.

The power to augment one's own powers. Sub-power of Power Augmentation. Technique of Personal Mastery.

User can empower their existing abilities to higher levels, certain users can even augment their powers to their highest/absolute level. Increasing their powers would could also change the color/shade/shape/feel of their powers.

Avatar Aang (Avatar: The Last Airbender), like all Avatars, can synchronize with the Avatars of the past…

…to access the Avatar State to strengthen their Bending abilities to their fullest.

The Glaives (Azure Striker Gunvolt) when activated, it empower user power but restrict useable of user power when inactive. 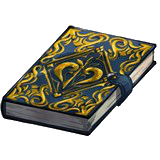 The Vizards (Bleach) can channel the spiritual energy of their inner Hollows to increase their powers.

Due to the his Saiyan heritage, Son Goku (Dragon Ball series) possesses Saiyan Power, the Saiyans' exclusive genetic trait that allows him to reactively enhance his own strength every time he recovers from a near-fatal injury.

Fulgore (Killer Instinct) can manually overclock his nuclear reactor to enhance his power.

Castiel (Supernatural) augmented his angelic powers to a godlike level by absorbing 30-40 million souls from Purgatory.

The Rinnegan (Naruto) can accelerate a Ninja's ability to unimaginable and uncontrollable power levels.

... while using the Power Gear to his maximum power, he is able to fire the extra-powerful Final Charge Shot.

The Young Guardians can subconsciously accelerate the development of their powers faster than normal neohumans.

Binding Brands, (Azure Striker Gunvolt) an sword-like spiritual artifacts that Glaives are derived from, activate the artifact allow user to act it as key to open Dragon Veins to obtain the Veins spiritual energy and empowered their Septimal Power