Use the traits of Selkie.

"Once a Selkie finds its skin again, neither chains of steel nor chains of love can keep her from the sea."
― The Secret of Roan Inish

The power to use the abilities of the Selkie. Variation of Mythical Bestiary and Pinniped Physiology.

User with this ability either is or can transform into Selkie (also spelled silkie, selchie; Irish/Scottish Gaelic: selchidh, Scots: selkie fowk), mythological creatures found in Scottish, Irish, Faroese folklore and in the Icelandic traditions. Selkies are seals in the sea but shed their skin to become human on land.

Male selkies are described as being very handsome in their human form, and having great seductive powers over human women. They typically seek those who are dissatisfied with their life, such as married women waiting for their fishermen husbands. If a woman wishes to make contact with a selkie male, she must shed seven tears into the sea.

If a man steals a female selkie's skin she is in his power and is forced to become his wife. Female selkies are said to make excellent wives, but because their true home is the sea, they will often be seen gazing longingly at the ocean. If she finds her skin she will immediately return to her true home, and sometimes to her selkie husband, in the sea. Sometimes, a selkie maiden is taken as a wife by a human man and she has several children by him. 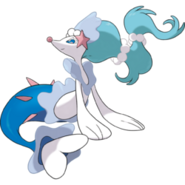 Primarina (Pokémon) is based on the Selkie.
Add a photo to this gallery
Retrieved from "https://powerlisting.fandom.com/wiki/Selkie_Physiology?oldid=1668809"
Community content is available under CC-BY-SA unless otherwise noted.